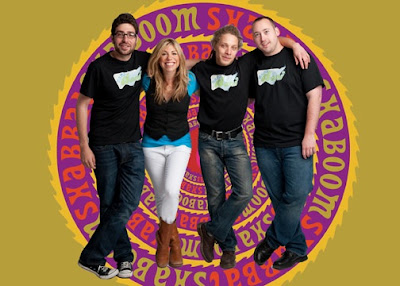 ROLL UP THE RUG AND MAKE SOME ROOM for
SHABBAT SHABOOM!
There was a little bit too much “chatter”
on this one for me…
but the music was fun and engaging.
Kid’s will love the silly upbeat songs,
but my two favorites were the bonus tracks.
The Friday Night Blessings, and Saturday Night Blessings.
These two were melodic and absolutely beautiful.
Here is the information that I received from Waldmania PR. 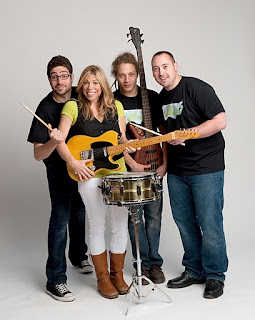 “Her stage name may sound as if it belonged on a jar of pasta sauce, but Mama Doni is an indisputably Jewish performer.  Doni Zasloff Thomas in real life, she specializes in putting a Jewish spin on all kinds of  musical styles, including reggae, rock, disco and Latin.”  – The New York Times

“Mama Doni … is part ‘Weird Al’ Yankovic (for the hilarious and surprisingly insightful lyrics), part Sarah Silverman (but much cleaner and only the parts of Sarah’s show where she innocently sings her little heart out), and that adorable mom down the street who manages to wear bright red lipstick and cute track suit to put out the recycling at 6 a.m.”  – KIWI magazine

Doni Zasloff Thomas, aka Mama Doni, is the lead singer/songwriter in The Mama Doni Band.   Doni’s “wacky, Jewish indie-rock band for kids” won the Simcha Award for Inspiring Joy Through Music in competition with more than 100 bands from 15 different countries at the 2008 International Jewish Music Festival in Amsterdam.   Quirky, zany, offbeat, and unpredictable, The Mama Doni Band expands the horizons of traditional Jewish music with a contagious and unexpected blend of reggae, rock, disco, Latin, klezmer and “Jewgrass” – all woven together with a hip Jewish sensibility.

The original songs and stories on Shabbat Shaboom transport listeners to a place where the album’s warmly sincere pop-rock title track happily melds with a Gloria Estefan-meets-Fiddler on the Roof conga line tune, “Challah-Day,” where the reggae-influenced “Mazel Tov” meets a disco ditty, “Sabbath Queen.”  Shabbat Shaboom touches on such aspects as lighting candles, being with family (mishpocha), celebrating bat mitzvahs, and even the “workout” that Mama Doni mischievously terms “synagoguersizing.”

Shabbat Shaboom marks the first Mama Doni CD to showcase the entire Mama Doni Band.  Says Doni, “Shabbat Shaboom is really an evolution for us.  It’s a little less shticky than my previous CDs.  Don’t get me wrong, it’s still fun!  But this album has a
slightly different vibe.  It’s more sophisticated musically than my earlier work, a bit more soulful,

The raison d’être of Mama Doni’s presentation goes deeper than surface “shtick.”  What’s important to Doni is the idea of giving children their own current and positive musical voice.  Doni lays out her mission: “I want to share with kids of all ages and backgrounds the humor and richness that effervesces throughout Yiddish language and Jewish culture. Through my music I hope that they can access the joy in this culture in a new way and have a rockin‘

I have a material connection because I received a review copy (book, CD, software, etc.),

or an item of nominal value that I can keep for consideration in preparing to write this content.
cmp.ly/1/sgpmpm

In accordance with FTC Regulations: I receive books and other products at not cost to me, in exchange for my HONEST review. Please scroll all the way down to the bottom of the page, for my Full Disclosure!
To get your own policy, go to http://www.disclosurepolicy.org
SHABBAT SHABOOM – Childrens CD Sunday – Review
Tweet
Pin
Share
Share
Share
0 Shares