Disclaimer:  I received a copy of this book from Deseret Book  for the purpose of this review.  All opinions stated are 100% my own. 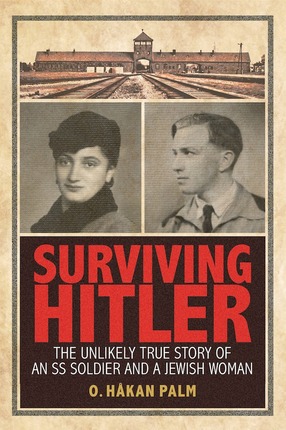 Gustav Palm kept his secret for more than forty years. He’d been a young man when Hitler invaded his native Norway. After being forced to guard a Nazi prison camp, however, Gustav took his only option for escape: he volunteered for the Waffen-SS to fight at the front.

Told in their own words, Surviving Hitler is the story of two indomitable spirits who built on their life-altering experiences to overcome the past, help each other heal, and embrace a common faith in God that led them to The Church of Jesus Christ of Latter-day Saints.

Like his brother and three sisters, O. HAKAN PALM, eldest son of Gustav and Agnes Erdös Palm, has been shaped by his parents’ wartime experiences. A successful management consultant in Stockholm, Sweden, Håkan has served faithfully in The Church of Jesus Christ of Latter-day Saints as a bishop, as a member of two stake presidencies, and seven times as a counselor in the Sweden Stockholm Mission. He and his wife, Barbro, are the parents of seven children.

We so often take for granted, the lives that we live today.  We forget the sacrifices that others have made .  We must never forget, in order to protect the future. As haunting and disturbing as memories can be, it’s important the we shed light on them, in order learn.  We can gain strength from those who have overcome and persevered.

Parleying between Gustar and Agnes, we learn of the horrors of the rein of Hitler. My heart sank as I read of the fear they endured and was enlightened by the indomitable faith that they showed during it all.

Despite the dark nature of the times, the book is dotted throughout with mention of  grace, honor and heroism – small acts of kindness, that were anything but small, when compared to the wrath the could have been bestowed upon the givers, had they been  if discovered.

Although it was often hard to continue reading, it was well worth a sleepless night or two…

…because, after all, we need to remember lest we forget!