Disclaimer: I receive set of The Nocturnal books and a Nocturnals Stuffed animal in exchange for review.  No monetary compensation was received.  Any opinions stated are those of the writer.

As a mom, I absolutely love fantastic books that will capture a child’s attention and help to them to expand their reading skills and imaginations.  As an animal lover, I am doubly thrilled when I find a book or set of books that have animals as their main focus. Enter The Nocturnals!

The Nocturnals features three unlikely friends: Dawn, a serious fox, Tobin, a sweet pangolin and Bismark, the loud mouthed, pint sized sugar glider. The stories all play out in their nighttime world with teamwork, friendship and humor in every adventure. 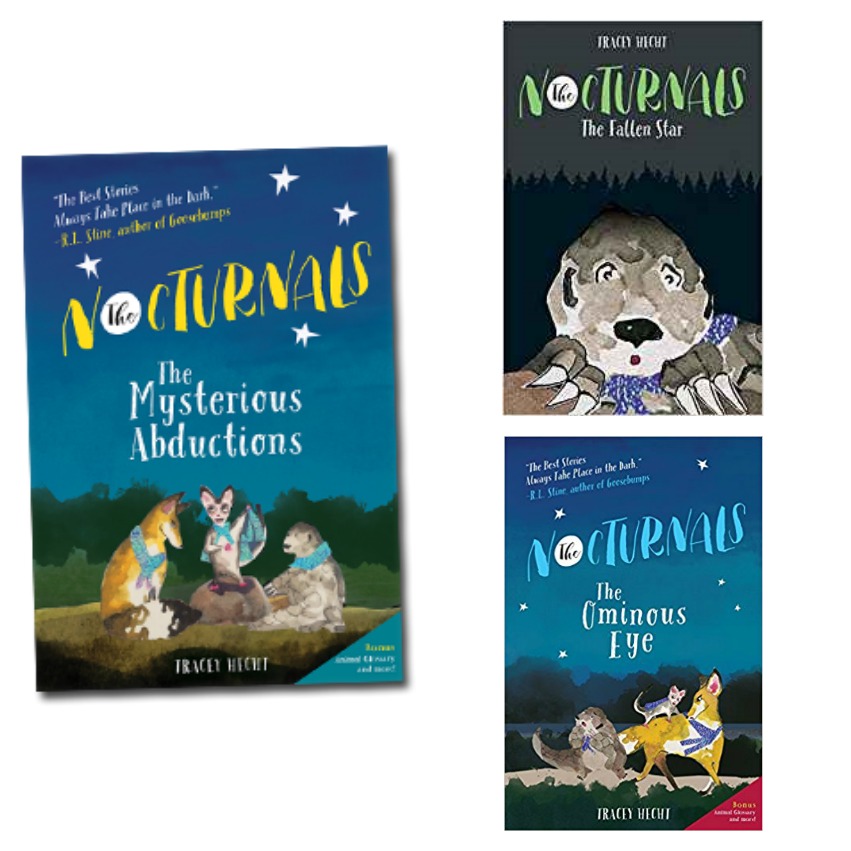 Animals are disappearing without a trace—and it’s up to Dawn, Tobin and Bismark to find out why. With the help of a gentle wombat, a jittery jerboa, a band of coyotes and some kooky bats, the brigade journeys to the depths of the earth where they find themselves in a wacky, high stakes game that will determine all of their survival!

Join Dawn, Bismark and Tobin as they set out to investigate the source of a violent jolt that fractures the earth! Along their journey, the Nocturnal Brigade meets an unfamiliar reptile—a tuatara named Polyphema—who reveals that a giant beast caused the destruction and will soon strike again. Polyphema with her special insights, is the only one who can help the Nocturnal Brigade stop this fearsome predator… but can she be trusted? With help from an owl, the jerboas, and some kiwis, the animals set a trap since surrender is not an option against this relentless beast.

Dawn, Tobin, and Bismark awaken one evening to a disaster: all of the forest’s pomelos have been mysteriously poisoned! As the Nocturnal Brigade sets out to investigate, they encounter Iris, a mysterious aye-aye, who claims monsters from the moon are to blame. While the three heroes suspect a more earthly explanation, the animals of the valley are all falling ill. And then Tobin gets sick, too! The Nocturnal Brigade must race to find answers, and the cure, before the pomelo blight threatens to harm them all.

Targeted for “middle grade” readers, I think that younger children will be captivated with the series if read to them, but there is a new Grow & Read publication for grade 1-2: The Moonlight Meeting 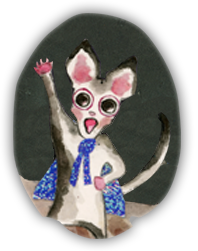 is a self-centered romantic with an unrequited love for Dawn. As a sugar glider he is capable of using his arm flaps to glide through the forests, though not of true flight. He takes great pride in his many talents, including his fondness for inserting foreign phrases into conversations, and maintains that sugar gliders are a superior species. His grandiose opinion of himself is in no way compensation for his, eh-hem, rather diminutive size.

is the fearless leader of the Nocturnal Brigade. With her wits, strength, and poise, she serves as the anchor to her more excitable companions. Her past is a painful subject, and she keeps her emotions under a lid—though this does not keep her from enjoying herself from time to time. Dawn will usually try and resolve conflicts with a stern look or common sense, but when push comes to shove, she will lead the attack.

is a sweet, bumbling pangolin with a big appetite and a bigger heart. His short-legged, anteater-like body is covered in a tough layer of scales that fit together like the petals of an artichoke. When scared, which happens rather often, he releases a defensive odor from the scent glands on his rear end. His unconditional love for Bismark and Dawn is always enough to override his fear of the unknown, and he is fiercely loyal to his friends and the mission of helping others.

About the Author and Illustrator 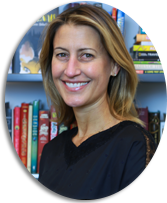 Tracey is a writer and entrepreneur who has written, directed and produced for film. Tracey currently splits her time between New York City and Oquossoc, Maine with her husband, four children and three pets—none of which are a sugar glider. 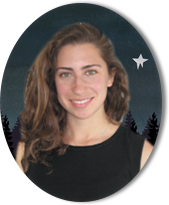 Kate is an artist who lives and works in New York City. She graduated from Yale University, contributes to the Brooklyn Rail, and has shown her work at multiple galleries. She grew up in Santa Monica, California.

Wrap up a set for your readers this holiday season. (And add a flashlight so they can be read under the covers:-)

One thought on “The Nocturnals by Tracey Hecht”

Want to Work With Us?

We would be thrilled to talk with you. Email Beautiful Touches