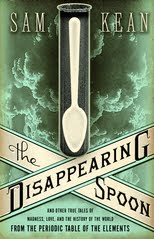 The Periodic Table is one of man’s crowning scientific achievements. But it’s also a treasure trove of stories of passion, adventure, betrayal, and obsession. The infectious tales and astounding details in THE DISAPPEARING SPOON follow carbon, neon, silicon, and gold as they play out their parts in human history, finance, mythology, war, the arts, poison, and the lives of the (frequently) mad scientists who discovered them.

We learn that Marie Curie used to provoke jealousy in colleagues’ wives when she’d invite them into closets to see her glow-in-the-dark experiments. And that Lewis and Clark swallowed mercury capsules across the country and their campsites are still detectable by the poison in the ground. Why did Gandhi hate iodine? Why did the Japanese kill Godzilla with missiles made of cadmium? And why did tellurium lead to the most bizarre gold rush in history?

From the Big Bang to the end of time, it’s all in THE DISAPPEARING SPOON.

Sam Kean is a writer in Washington, D.C. His work has appeared in The New York Times Magazine, Mental Floss, Slate, The Believer, Air & Space, Science, and The New Scientist. He is currently working as a reporter at Science magazine and as a 2009 Middlebury Environmental Journalism fellow.

My Review:
I liked this one.
Kean takes lots of previously dull information
(to me anyway)
and makes it  INTERESTING!
He does this by using language that
I can understand:-)
and adding tidbits of history
and a little humor now and then.
Textbooks that are written like this,’
would make learning so much more fun.
Double thumbs up for The Disappearing Spoon.
Thanks to Ann and Hachette,
I have 2 copies that I can give away.
Here are the Rules:
Giveaway open to residents of the US and Canada
Hachette will not Send to P.O. Box Addresses
To Enter – leave a comment telling me what your favorite
subject was, in school.
Make sure to leave a valid email address with your comment.
Extra Entries
+1 Retweet – can be done once each day – leave a link.
+2 Follow me on Twitter – leave your Twitter ID
+3 Follow me on Networked Blogs
Giveaway ends at Noon Central
September 20th
Good Luck & Good Reading

In accordance with FTC Regulations: I receive books and other products at not cost to me, in exchange for my HONEST review. Please scroll all the way down to the bottom of the page, for my Full Disclosure!
To get your own policy, go to http://www.disclosurepolicy.org
THE DISAPPEARING SPOON – Giveawy / Review
Tweet
Pin
Share
Share
Share
0 Shares