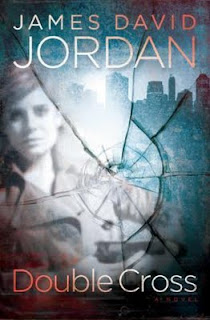 From Suicide to Sacrifice
In James David Jordan’s new thriller, Double Cross,
an ex-Secret Service agent
deals with the truth about her past.

“The day my mother came back into my life began with a low December fog and a suicide.” So begins James David Jordan’s latest novel, Double Cross, which follows the exploits of Taylor Pasbury, a young ex-Secret Service agent with a checkered past and a penchant for finding trouble. Even as a high school kid, Taylor knew she was not like most other girls. Raised by her father, a retired Special Forces officer, she learned to camp, shoot, and most of all, take care of herself. Now a young adult, Pasbury opens her own security agency and finds herself in the middle of a mysterious case full of danger and intrigue.

When the top assistant of her former client turns up dead, all signs point to embezzlement and suicide. But in the world of Taylor Pasbury, nothing is as it seems. A trail of clues leads to Taylor’s mother, who abandoned her when she was nine. What begins as a suicide investigation becomes a personal quest to find the truth about her past.

Double Cross is an action-packed story that provides thrilling twists and turns as well as a thought-provoking look at the personal and spiritual struggles of characters who are as complex as they are flawed. Ultimately, it’s a story of self-examination that describes Taylor’s journey toward the conclusion that some sacrifices can never be earned.

James David Jordan is a successful business attorney in Dallas, Texas, and was named by the Dallas Business Journal as one of the most influential leaders in that legal community. Jordan followed his aspirations of becoming an author, taking five years to create his first book, Something That Lasts, which was well-received by both critics and the public. His second book, Forsaken, won the Reader’s Choice award from RelzReviews and The Suspense Zone.

Jordan writes with a commitment to tell page-turning stories that challenge readers to explore and grow in their faith. With gripping authenticity, Jordan examines subjects of family and faith and skillfully draws readers into the crisis faced by Taylor Pasbury. Along the way, readers will find ample opportunity to re-assess their own life situations and wrestle with their own thoughts about forgiveness and grace.

To learn more about James David Jordan, please visit his website HERE.
My Review:
Taylor and Kacey are hot on the trail.
They want to find out how Elise really died.
Taylor’s long lost mother shows up.
Things get crazier and crazier.

Double Cross has everything that I want in a book.
It’s action packed, well told, and it isn’t filled with
graphic sexual scenes, or foul language!
It is Christian fiction at its best.

I enjoyed every minute that I spent between it’s covers.

(Scroll down for Discussion Guide)

Thanks to Audra and the TBB Media Group
for giving me the opportunity to review Double Cross.
*
DISCLAIMER
I received a copy of this book, at no charge to me,
in exchange for my HONEST review.
No items that I receive “in kind”
are ever sold…they are kept by me,
given to family or friends,
or donated to The Polk Education Foundation,
my local library, or given away on
contests on this blog.

1. Taylor Pasbury has many good qualities, but she seems incapable of developing a healthy relationship with a man. What mistakes does she make that contribute to her problem?
2. By the end of Double Cross, Taylor believes she has identified “the secret.”
What is it? Is she correct?
3. Taylor’s mother is a quirky wreck, but she manages to pass on some wisdom to her daughter in spite of her own shortcomings. What important lessons does she teach Taylor?
4. When Taylor is stressed out, she falls back on a paraphrase of one of Jesus’s sayings from the Bible (Matthew 6:34). Today’s worries are enough for today. Have you ever tried to apply that lesson in your life? If so, what have the results been?
5. What applications do the lessons that Taylor learns about sacrifice and grace have for your understanding of your faith?
6. What makes Taylor’s mother nearly incapable of expressing her love for Taylor? Do you have similar difficulties with your mother or daughter?
7. Why did Taylor have so much difficulty identifying the one solid man in her life? Have you ever looked right past someone whom you wish you would have seen more clearly? If so, what could you have done differently that might have changed things?
8. Despite all of her talents, Taylor is incredibly self-critical.
Why does she have so much trouble giving herself a break?
9. What do you think is the single most important next step for Taylor to get her life
and faith headed in the right direction?

In accordance with FTC Regulations: I receive books and other products at not cost to me, in exchange for my HONEST review. Please scroll all the way down to the bottom of the page, for my Full Disclosure!
To get your own policy, go to http://www.disclosurepolicy.org
Double Cross, by James David Jordan / Review
Tweet
Pin
Share
Share
Share
0 Shares