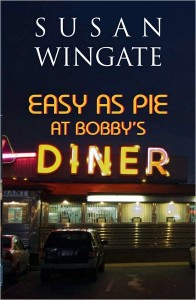 From the Publisher:
Georgette Carlisle, lost her first husband and is about to lose her next, one Hawthorne Biggs. She’s running the diner with Roberta, her late husband’s daughter. When old friend, Helen, comes back home after a failed attempt at a writing career, she is, once again, attracted to Georgette’s man. After the two women part company Helen goes missing. While digging around, Georgette finds out that Biggs has a dangerous past. With Roberta at her side, the two women, brave separation, torture and near death at the hand of Biggs. And, after taking him down, the women find a new strength and belonging. EASY AS PIE is the number two book in the four-part “Bobby’s Diner” series. 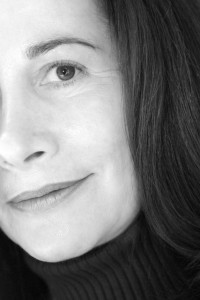 Award-winning author, Susan Wingate, gets a monthly column about writing and the publishing industry in her local newspaper, The Journal of the San Juan Islands. She will also be posting weekly discussions about the writing industry for the regional online newspaper, the PNWLocalNews.com site.
You can view Wingate’s discussions by clicking on the “Entertainment” tab and then finding Wingate’s discussions under the “Blogs” section of the Entertainment Page.
Born in Phoenix, Arizona to James & Amie Ajamie (a writer and an artist, respectively), Susan Wingate tried to fly, at age five off the roof of their family house using newspaper, wire hangers and scotch tape. She’s been dreaming of flying ever since. Oh, by the way, she never jumped. Her mother ran out in the nick of time to stop her from take-off.
Wingate realized her dreams when she entered the world of writing. At first, she only wrote songs and poetry but then her writing blossomed when she tried her hand at fiction. In 1997, she devoted her days to writing and in 2004, she began writing full-time. Since then, Susan has written several plays, one screenplay, one short story collection and seen novels with two more scheduled to be written in 2010. In 2008, she started writing a memoir.

A lover of the arts, Susan draws and paints abstracts using oil as her favored medium. She has taken up playing the violin (it’s been a squeakly start) and she loves the theatre. Susan lives in Washington State.
Wingate’s novel, Bobby’s Diner, received three finalist awards in the following book competitions:

■2010 International Book Awards,
■2009 National Book Awards (USA Book News),
■2009 Next Generation Indie Book Awards
In May 2010, two of Wingate’s novels were released, they are:
■A FALLING OF LAW, and
■EASY AS PIE AT BOBBY’S DINER (the no. 2 book in the Bobby’s Diner Series)
“Camouflage,” Wingate’s fourth novel (written as Myah Lin) received a Finalist Award and an Editor’s Choice Award in the 2009 Textnovel Writing Contest.
To date, Wingate has written seven novels, two short story collections, a memoir, hundreds of poems, a few plays for theatre and one screenplay.
Her books can be found online and in bookstores across the country and her articles, short stories and poetry can be found in magazines, journals and reviews.
Locally, Wingate volunteers with the San Juan Island Library. She offers workshops, readings and presentations at writing conferences, bookstores and libraries throughout the country.
You can visit her website at www.susanwingate.com.
My Review:
Easy As Pie, goes down best with a little whipped cream and a big glass of milk!
I love “small town” stories, I love mysteries, and I love good eats, so
Easy As Pie, stays on my menu.

The only thing that really bothered me is the language

sprinkled here and there… I just HATE the F word, and I
truly believe that it could have been left out.
For the most part, Wingate’s words paint vivid pictures,
of even the most mundane situations
of situations, and the story kept me on my toes.

Easy As Pie was a quick read, and  I was rewarded with not only
a satisfying ending…but some recipes as well.

Thanks Pump Up Your Book Promotions
for including me on the tour.

*
I received a free copy of this book,
for the purpose of this review.

In accordance with FTC Regulations: I receive books and other products at not cost to me, in exchange for my HONEST review. Please scroll all the way down to the bottom of the page, for my Full Disclosure!
To get your own policy, go to http://www.disclosurepolicy.org
EASY AS PIE – Review
Tweet
Pin
Share
Share
Share
0 Shares