Skip to content
Hi All
My Grandson, Ethan,
will not be doing occasional reviews
here at Libby’s Library.
I’m hoping that Ethan’s Elucidations
will become a monthly
or bi-monthly occurrence.
Ethan is 10 (going on 60).
I often think of him as an old soul
in a very young body.
He has the wisdom of Saul,
and the compassion of Mother Teresa.
I love him very much,
and am honored to have him as my
grandchild
&
as a fellow book lover
and reviewer!
Reviewed by Ethan
(He is probably going to get really ticked
that I chose this photo…but dang, he’s
just so darn cute in this one!) 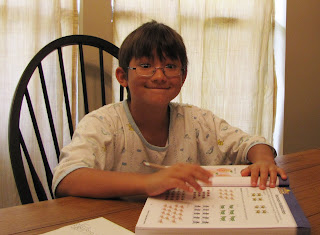 Ethan gets the books, that he will be reviewing,
from his school library. 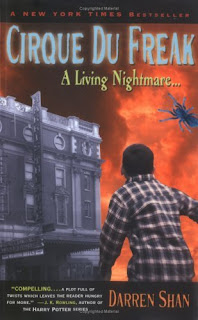 The Cirque Du Freak is a series where a boy named Darren Shan went to a freak show but at this freak show has a vampire in there.  (The first book in this series is called A Living Nightmare) The vampire has a spider that is rare but if you get bitten by the spider you could die. But the vampire can control it by this special flute. The next few days later Darren decides to take the spider and the special flute. So later on he tries to train the spider with the flute and to his luck he can now controll the spider. So when his best friend came over he told him that he stole the spider from the freak show. But the friend was scared since he stole from a vampire. Then he firgures out that Darren knows how to controll the spider. But the spider has bitten Darren’s best friend. So to cure this bite Darren has to go back to the freak show to ask the vampire for the cure but if Darren wants the cure he will have to become a vampire. Find out what happens by reading the book.

In accordance with FTC Regulations: I receive books and other products at not cost to me, in exchange for my HONEST review. Please scroll all the way down to the bottom of the page, for my Full Disclosure!
To get your own policy, go to http://www.disclosurepolicy.org
Ethan's Elucidations (snappy title isn't it) …A New Contributor!
Tweet
Pin
Share
Share
Share
0 Shares