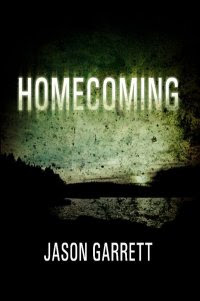 HOMECOMING
by Jason Garrett
FROM THE PUBLISHER:

On a perfect autumn night in the coastal village of Wicker Bay, a young couple was attacked and a life was forever changed. When teenager Nickel Warren awoke she learned her boyfriend, Eric, had mysteriously vanished. Seemingly the only person on Bishop’s Island eager to find him, Nickel devoted her life to learning what happened to her first love on that tragic night. Though the years provided no clues or comfort, she never allowed herself to stop believing Eric was alive.

Now, after an eighteen year absence Eric Kade has resurfaced on Bishop’s Island under circumstances as unsettling as his disappearance. Though reunited, Nickel’s search for answers is sidelined by another horrific event more deeply connected to her childhood sweetheart than she can imagine. Living as a preacher, Eric has traveled the world for nearly two decades hunting demons in a sect named The Progeny. But a chilling prophecy has named him as a threat and turned his fellow hunters against him.

With a sense of urgency, Eric has come back to the island not to rekindle the past but to protect the home he loves from an oncoming war. Relying on the help of a rare group of locals, he builds a network of his own to defend the unknowing against a world he has come to know too well. As he works to prepare a haven, Eric will strengthen his bond with Nickel and introduce her to a world of miraculous events and unholy terror.

ABOUT THE AUTHOR:
Since 2009, Jason Garrett has led readers on a series of thrilling journeys that began upon the foray into the world of Eric Kade in the novel HOMECOMING. Following the lives of two distinct characters, Garrett’s series immersed readers in a world of long lost love, faith and honor, betrayal and morality, and many other topics all beneath the clever guise of a horror tale. As seen through the eyes of demon-hunting preacher Eric Kade and the love of his life, Nickel Warren, HOMECOMING is an inspirational thriller sure to encourage and appeal to a vast audience of believers and non-believers alike.

In 2010, Garrett led readers back to Bishop’s Island for the tale of Aryn and Ryan Rayburn. With PURSUIT, his second novel under the Dream Big publishing logo, the history of Bishop’s Island unfolds over the course of the abduction of beautiful historian, Aryn Rayburn. As her husband, Ryan, sets out to rescue her, she uncovers deeply buried secrets and treasures on their island home. This story of love and redemption has resonated with many readers and has opened up a whole new world for readers to discover.

In accordance with FTC Regulations: I receive books and other products at not cost to me, in exchange for my HONEST review. Please scroll all the way down to the bottom of the page, for my Full Disclosure!
To get your own policy, go to http://www.disclosurepolicy.org
Feature Friday – HOMECOMING
Tweet
Pin
Share
Share
Share
0 Shares