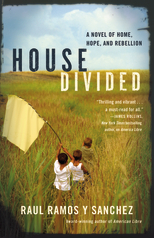 Once they had a country, a culture, a future. Today, upheaval and betrayal have turned their world upside down. And for one family-a U.S. war hero, his deeply religious wife, and their impressionable fourteen-year-old son-a new struggle has just begun.

Mano Suarez made a choice to fight against injustice, and his wife can only pray for his deliverance. Now their son, Pedro, takes up his father’s cause . . . disappearing into the ranks of a cult-like organization and leaving his family far behind. To rescue him, Mano must face the consequences of his past deeds. But how can he convince his son to give up the very ideals he, Mano, embraced? How can he prove that home and family are the most important ideals of all?

Cuban-born Raul Ramos y Sanchez grew up in Miami’s cultural kaleidoscope before becoming a long-time resident of the U.S. Midwest. Following a successful 25-year advertising career that included founding an ad agency with offices in Ohio and California, Raul turned to more personally meaningful work. HOUSE DIVIDED is the second book of the AMERICA LIBRE trilogy, which Ramos began in 2004 with the input of scholars from the USA, Latin America and Spain. Besides developing a documentary for public television, Two Americas: The Legacy of our Hemisphere, Raul writes for a variety of publications and hosts www.

Thanks to Valerie and Hachette
I have one set  – America Libre and House Divided
to give away.
-Only residents of the U.S. or Canada are eligible to win
-No P.O. Boxes, please.
-Winners will be subject to the one copy per household rule,
which means that if  you win the same title in two or more contests,
you will receive only one copy of the title
(or one set in the case of grouped giveaways)
in the mail.
-Giveaway copies will be sent directly to winners.
To Enter:  Leave a comment with a valid email address.
Extra Entries:
+1 Follow me on Twitter – HERE
and tweet this giveaway.
(You may tweet once each day.)
Please leave your Twitter ID.
+2 Follow me publicly via GFC – right sidebar.
Please leave the name you follow under.
+3 Follow Libby’s Library on FB – HERE

In accordance with FTC Regulations: I receive books and other products at not cost to me, in exchange for my HONEST review. Please scroll all the way down to the bottom of the page, for my Full Disclosure!
To get your own policy, go to http://www.disclosurepolicy.org
Giveaway / Feature – HOUSE DIVIDED
Tweet
Pin
Share
Share
Share
0 Shares