If You Give a Moose a Muffin…Part 3: More Jam 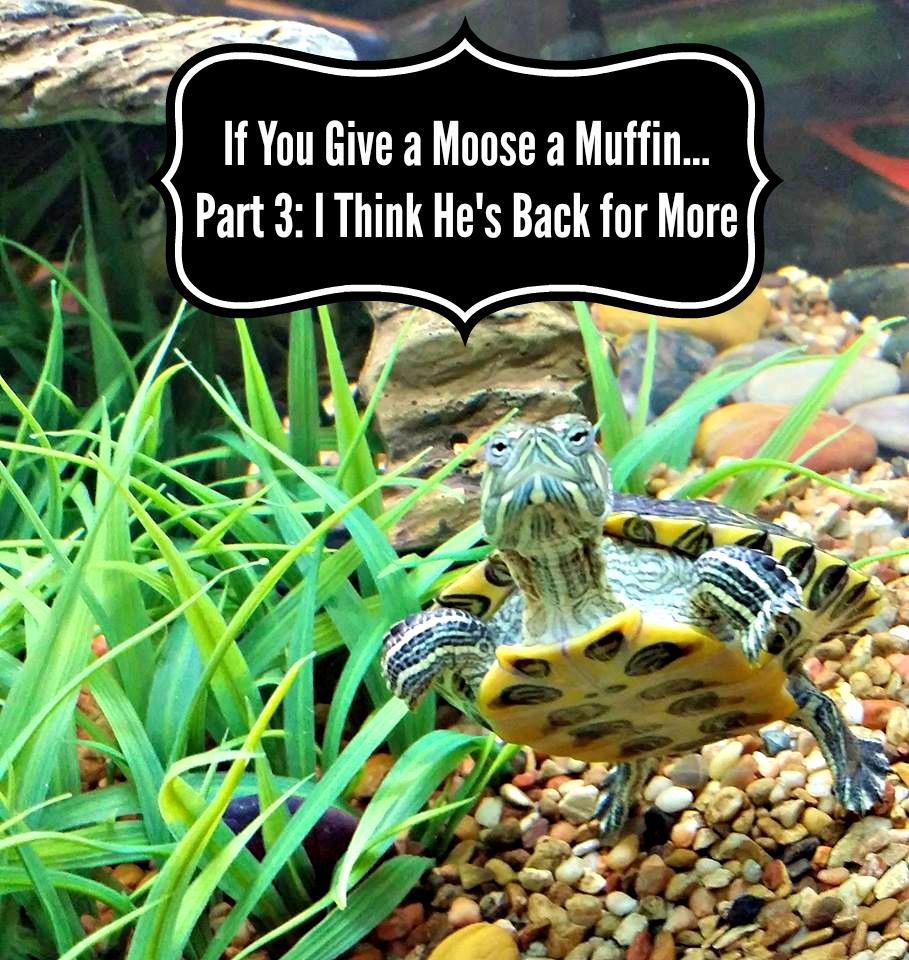 Since my babies are growing, they need a bigger tank.  We headed over to PetSmart on Saturday after noon.  Luckily for me, they had a sale on some of the fish tanks.  We found a 75 gallon tank and stand set, that was $100 off.  It has two hoods with lights, which I really like.  Then, of course, I talked my way into a few “accessories” –  grass and a turtle dock.

Hubby paid for the stuff and while they went to get a cart to wheel it out of the store, he went and pulled the car up to the front of the store.  We kind of forgot that Miss K was with us.  Well, we didn’t forget her.  She was by our sides the whole time…we just forgot about the fact that she and her booster seat, take up part of the back seat.  We were only able to lower one of the seats, so only the tank would fit into the back of the vehicle (we have a Kia Sorento – we are a loyal Kia family – BLATANT PLUG TO KIA) and it was quite an undertaking figuring out how to wedge it in. By the time we managed to get it in and be able to shut the door, Steve was sweating profusely, and Miss K was fussy because we told her we had to go back home before we could take her to Target.

Once we got back home, Sarah came out and helped Steve carry the tank  into the house…then back to PetSmart we went.  The stand was even harder to fit into the car. I think that a few expletives may have run through our heads. We did manage to finally get it situated. We then took K to Target. While we were there, we picked up a couple of grocery items, along with a movie, a toy and this and that (mind you, we had just done our grocery shopping there the day before).  Shopping at Target is the same as shopping at WalMart.  You go in intending to buy just an item of two, and leave with a full cart {sigh}.

Back home we went, and the car was unloaded once again.  Uuuuummmmmmm.

The tank looked a lot smaller in the store!

Luckily the old tank was on a stand with sliders underneath it.  We were able to slide it out of the way and move the new stand in its place.  Then the tank was placed on the stand.  Now to fill the sucker.  I grabbed my gallon pitcher, that I use just for turtle tank water, and started carrying pitcher after pitcher into the living room. After I had done this about 8 or 9 times, Sarah comes downstairs and gives me HER LOOK. I can see into her head when she does that.  It’s like “mom, I love you dearly, but whoa, I think you’re losing it!”. She smiles and says, “wouldn’t it be easier if you just used the hose that’s attached to the facet in the back yard?”  So that’s what we did.  It only took a couple of minutes to fill the tank.!

,Then, since I wasn’t able to reach the bottom of the tank to add gravel. I sloooooooooooooooooooowly poured it in, until the bottom of the tank was covered.  I then added some river rocks, one by one, so as not to break the glass.  Once I got that done, I added the patch of fake grass that we bought. Dang, just having one patch of grass looks stupid.  *Note to self – send grandpa to buy more grass. Now I need to put together the turtle dock, only  I noticed that it had a big crack in it.  I’m sure that PetSmart would have gladly exchanged if for a new one, but at this point there was NO WAY that I was gonna ask Steve to drive back into THE BIG CITY.  Sarah and I managed to glue it back together with super glue.  Once we were sure that it was dry, I put it into the tank.  Now to move the filter from one tank to the other…

So, the moose has eaten all the muffins and wants more…..

The hoses on the filter are not long enough for the new tank! I found our library stool, which was just the right height, to prop it up on.  I decided that since we had this brand spank’n new tank, I should clean the filter and hoses before hooking it up again.  That took a good half hour, and darn it all, I couldn’t get it put back together again.  I finally just decided to leave out one of the trays and manged to get it to close.  I then got everything in place and plugged it in.  Guess WHAT?  It  worked out perfectly.  LOL – you were expecting another disaster, right?  You won’t be sorry, because that is another post!

Then it was time to move Turner and Tucker – AKA Stumpy, to their new home!

They have plenty of room now, and I think that this tank will last us for several years. I plan to cover the bottom of the tank with grass, and then get some taller plants, for esthetics. Of course, the old filter isn’t big enough to accommodate the new tank, so we will have to get another one, and maybe a few other decorations…oh, and a top of the tank basking station with a heat lamp and…

3 thoughts on “If You Give a Moose a Muffin…Part 3: More Jam”