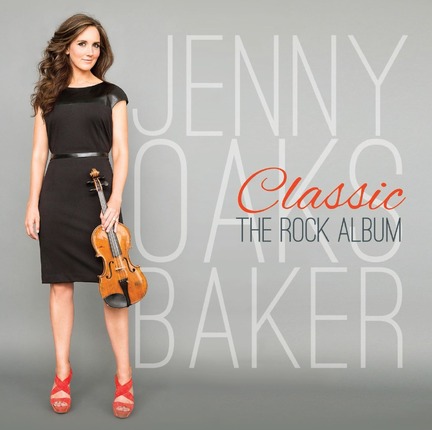 Grammy-nominated #1 Billboard Violinist she takes her style to an all-new level with her new release, Classic: The Rock Album. Featuring classic rock favorites like Stairway to Heaven (Led Zeppelin), Sweet Child of Mine (Guns and Roses), and Yesterday (The Beatles), you won’t believe your ears as one of the country’s most accomplished and acclaimed violinists combines her insane talent with the heart-pumping tunes that have defined a genre for generations.

Grammy Nominated Artist Jenny Oaks Baker is one of America’s most accomplished violinists. She received her Master of Music degree from the renowned Juilliard School in New York City and her bachelor’s degree in violin performance from the Curtis Institute of Music in Philadelphia.

She has released eleven albums since 1998. They consistently chart on Billboard, including the #1 spot on the Top Classical Albums chart. Her album Wish Upon a Star earned a nomination for the 54th GRAMMY Awards for Best Pop Instrumental Album.

Jenny Oaks Baker has performed as a soloist at Carnegie Hall, Lincoln Center, and with the Jerusalem Symphony, Pittsburgh Symphony, Utah Symphony, and the internationally acclaimed Mormon Tabernacle Choir. Jenny performed as a first violinist with the National Symphony Orchestra for seven years before resigning to devote more time to her young family. Jenny and her husband Matthew have four children.

This collection is Phenomenal!  Baker has taken the best of the best and made them even better.

I had the sister missionaries over the other day.  They spent their “P Day” (preparation day) at my house.  While their laundry was washing and drying, I taught them how to make their own smash scrapbooks, to use to record all the ins and outs of their missions. We had a blast, and while we worked, we cranked up the music and listened to CLASSIC – The Rock Album.

I’ve always has a very eclectic taste in music (something that my husband and I share), so this collection really hit the spot.  Classic rock music in full orchestration!

Baker is an incredibly talented musician, and now I’m hooked.  I’ll be buying her other CD’s, for sure!

Legal Mambo Jumbo:  Although I received a copy at no charge for the purpose of this review, the opinions expressed, are 100% my own.