Bringing you another great Book Blast…

thanks to Book Blasts and Blog Tours – Hosted by I Am a Reader, Not a Writer. 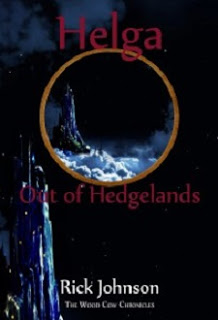 Helga: Out of the Hedgelands

Twelve-year-old Helga has more danger in her life than most beasts her age—Wrackshee slavers after her, a vicious attack by bandits that nearly kills her, a race against dragons pursuing her, and leading a daring rebellion to save her life and rescue friends and family from the insidious WooZan. And that is just the beginning. But what do you expect when you are a young beast who just can’t see the stupid rules of the world making any sense? Helga can’t accept things as they are and ends up taking on not just one, but two all-powerful, supreme tyrants in two different realms.

Helga never intended to lead a revolution. It just sort of happened because she wouldn’t go along with the “rules of normal” that keep tyrants in power and entire societies enslaved. Beginning on a dangerous quest to solve some mysteries in her own past, Helga leads her quirky comrades on a journey that will not only forever change them, but upset ancient civilizations.

As an author, I’m drawn to eccentric, unexpected characters: those who surprise because they hear a distant galaxy, see a different music, create their own fragrance rather than get hooked on a soundtrack; the child who has her own ideas about how the emperor is dressed; the lunatics and rebels who tell stories on the boundaries. Helga’s unusual story will take readers to worlds they never imagined—definitely a whole new ride.

Time and again, the unconventional heroine and her eccentric comrades overcome ominous tyrants and black-hearted slavers, not by battling to the last beast standing, but by being the first beast to think differently.

Helga: Out of Hedgelands is divided into three books which introduce the epic saga of the Wood Cow clan and their role in overturning centuries of slavery and tyranny. This story will continue in additional volumes of the Wood Cow Chronicles now in development. Over the series of current and future volumes, the entire history of the Wood Cow clan, the fall of Maev Astuté, and the coming of Lord Farseeker to the Outer Rings, will be told.

I am a native of the Great Plains, having grown up on a farm in the Platte River Valley of western Nebraska. I love the wild beauty of the Plains and nearby Rocky Mountains–the too hot, too cold, too empty, too full of life extremes. Typically, the awesomely diverse and the awesomely stark are much the same, even as they are different. Although I have lived in Michigan, North Carolina, and British Columbia, the western plains, mountains, and desert are in my heart.

As my day job, for over thirty years I have been a faculty member and administrator in higher education. Teaching broadly in the liberal arts, including creative writing, my professional publications include educational materials, poems, and 28 stories for young readers. During my spare hours, I have also collected and carefully studied the records of former times upon which the Wood Cow Chronicles are based. It is my privilege to bring this astonishing saga to light.

The Wood Cow Chronicles have been researched and written with the irreplaceable assistance of Barbara, my beloved wife of more than thirty-five years, and our children. Indeed, the essential research into the history of the Wood Cows has been conducted during the odd hours of family reading and storytelling “around the campfire” as we say–even when there is no campfire! This research continues and grows richer as our family expands across generations and continents.

Open only to those who can legally enter, receive and use an Amazon.com Gift Code or Paypal Cash. Winning Entry will be verified prior to prize being awarded. No purchase necessary. You must be 18 or older to enter or have your parent enter for you. The winner will be chosen by rafflecopter and announced here as well as emailed and will have 48 hours to respond or a new winner will be chosen. This giveaway is in no way associated with Facebook, Twitter, Rafflecopter or any other entity unless otherwise specified. The number of eligible entries received determines the odds of winning. Giveaway was organized by Kathy from I Am A Reader, Not A Writer http://iamareader.com and sponsored by the author. VOID WHERE PROHIBITED BY LAW.