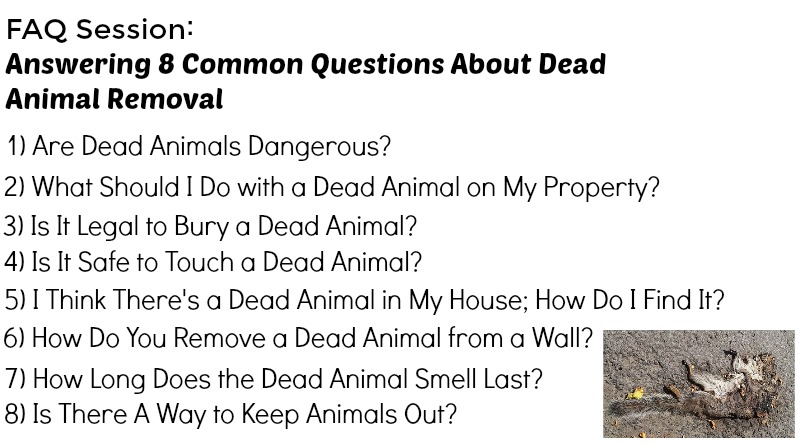 Animals die every day. Some pass away quietly in the woods due to natural causes. Others have unfortunate run-ins with vehicles on the roadways. In some cases, wild animals come in contact with poisons set out to get rid of pests. These are only a few of the ways an animal might leave the land of the living. Most people never give these matters a second thought. Of course, if the animal happens to lose its battle with time and the elements on your property, it’s not exactly out of sight and out of mind.

Finding a dead animal on your property can certainly be unnerving. That’s not something you want to stumble upon while taking out the trash or mowing the lawn, and it’s certainly not something you want your children to see while they’re outside playing. You can’t simply leave it lying there and hope it’ll go away on its own, but how should you proceed? If you’re looking for help with dead animals, you’ve come to the right place for answers to your questions.

This is a complicated question. In short, no. From the most basic standpoint, dead animals aren’t dangerous. They can’t scratch or bite, so you don’t have to worry about them attacking pets or children. From a broader perspective, though, dead animals may present certain hidden hazards. Decaying flesh creates bacteria, and it can breed mold and other pathogens. At the same time, the animal may be carrying parasites, such as fleas and ticks, and they can be dangerous in their own rights. Decaying carcasses also attract scavengers and decomposers, and they may be hazardous as well.

2) What Should I Do with a Dead Animal on My Property?

What you should do with a dead animal on your property depends on a few factors. First, if it’s a small animal, like a bird, squirrel, or raccoon, you could simply slide it into a trash bag, close the bag securely, and place it in an outdoor trash can. For larger animals, this might not be so simple. In this case, you could call the local Animal Services Division. They don’t pick up dead animals in all situations, though. Alternatively, you could call a pest control specialist for help.

3) Is It Legal to Bury a Dead Animal?

Yes, it’s legal to bury a dead animal that’s on your property. If you choose this route, consider placing the animal in several trash bags or wrapping it in thick plastic beforehand. Also, bury it as deep as you can. Both the measures will help keep the smell from attracting other creatures to your property that might dig up the animal’s remains.

4) Is It Safe to Touch a Dead Animal?

While it’s probably not overly dangerous to touch a dead animal, taking the proper precautions is advised. After all, you can’t be sure of what caused the animal’s death. Only touch the animal with the plastic or trash bag you’re wrapping it in or use rubber gloves. Consider wearing safety glasses as well. If you have any cuts, scrapes, or open wounds, it’s best not to touch the animal because these could be portals for pathogens to spread from the animal to you. Instead, call a local pest control company or the Animal Services Division.

If you think there may be a dead animal in your house, the best places to start your search are the attic, crawlspace, and underneath the porch or patio. In some cases, though, homeowners aren’t fortunate enough for it to be that simple. Sometimes, animals get trapped inside walls or underneath floorboards and ultimately die there. To find those more elusive carcasses, you may have to simply follow your nose. Again, wildlife control specialists can help with the search.

6) How Do You Remove a Dead Animal from a Wall?

Deep down, you probably know this answer. The better question may be, “How much damage will removing the dead animal cause?” The amount of damage will vary a bit, but professionals do their best to cause only minimal damage. This means pinpointing the source of the smell as closely as possible. From there, a hole may need to be cut in the wall, or flooring may need to be removed. You may also need to replace the insulation in the area where the animal is found.

7) How Long Does the Dead Animal Smell Last?

How long the smell of a dead animal will remain in your home varies. Depending on the size of the animal and its state of decomposition, the odor could last for a few days or several weeks. After the animal is removed, cleaning the area with bleach will help get rid of the bacteria, fluids, and bad smell. You’ll find a few products on the market designed specifically for such purposes, but a simple solution of baking soda and water may be effective for neutralizing the lingering smell.

8) Is There A Way to Keep Animals Out?

Yes, there are many ways to keep animals from venturing onto your property and getting into your home. If you don’t have a fence around your property, consider having one installed. In the event you already have a fence but it’s damaged, have it repaired. Covering crawl space vents and gaps in your eaves will help as well. Wildlife control experts can inspect your home for areas where animals can get inside and offer advice on sealing them effectively.

No one wants to find a dead animal on their property, and having one in a home is even worse. You can take care of the problem yourself by burying the carcass or bagging it and placing it in a trash can, but it’s important to take the necessary safety precautions when doing so. If the animal is too heavy for you to move or you prefer to avoid the DIY approach, don’t hesitate to call in the professionals for assistance. Also keep in mind that preventative measures can help keep the issue from arising in the future. 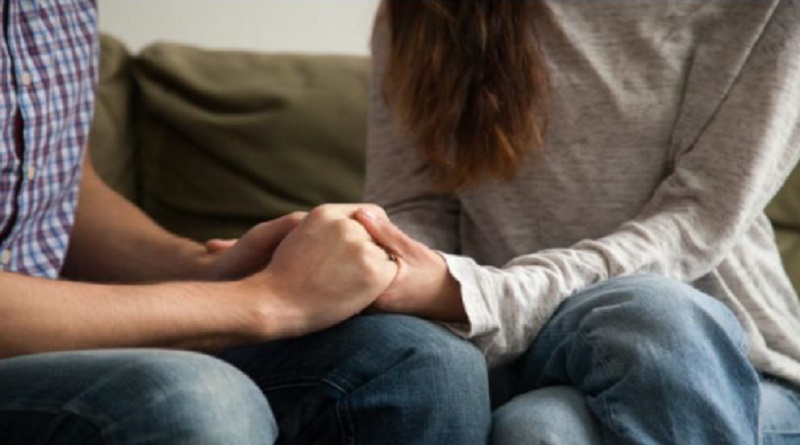 4 Simple Ways to Spice Up Your Relationship