will be available on Blu-ray and DVD on March 6th 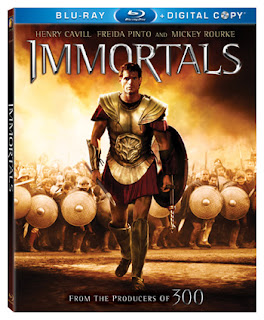 EPIC BATTLES COME TO LIFE ON STUNNING BLU-RAY
Featuring Alternate Beginning and Endings Visually-Striking Film Explodes
on 3D Blu-ray Combo Pack,Blu-ray Triple Play and DVD March 6
Summary: One brave warrior, touched by the gods, must overcome all odds to save mankind from a merciless and powerful tyrant whenIMMORTALS comes to Blu-ray and DVD on March 6th from Twentieth Century Fox Home Entertainment. Directed by visionary filmmaker Tarsem Singh (The Cell, The Fall) and written by Charles Parlapanides and Vlas Parlapanides, the home entertainment release is chock-full of must-see bonus features including an alternate beginning, two alternate endings, deleted scenes and an amazing graphic novel, creating the ultimate viewing experience.

From the producers of 300, Mark Canton, Gianni Nunnari, and Relativity’s CEO Ryan Kavanaugh, IMMORTALS explodes off the screen with action-packed battles, mythological adventure and an all-star cast including: Henry Cavill (Superman: Man of Steel), Luke Evans (Robin Hood), Kellan Lutz (Twilight), Isabel Lucas (Transformers: Revenge of the Fallen), Freida Pinto (Slumdog Millionaire), Stephen Dorff (Public Enemies), John Hurt (Hellboy) and Mickey Rourke (Iron Man 2). In this epic tale of vengeance and destiny, power-mad King Hyperion (Rourke) threatens to destroy all of humanity on his maniacal quest to obtain the ultimate weapon – the legendary Epirus Bow that gives the power to unleash war on both Heaven and Earth.  But Theseus (Cavill), a heroic young villager chosen by the gods, rises up to stop Hyperion’s brutal rampage.  With supernatural help from the beautiful oracle Phaedra (Pinto), Theseus embraces his destiny and leads a fierce band of warriors in a desperate fight for the future of mankind.

IMMORTALS is available on Blu-ray and DVD on March 6th and was theatrically-released by Relativity Media on November 11, 2011.

In accordance with FTC Regulations: I receive books and other products at not cost to me, in exchange for my HONEST review. Please scroll all the way down to the bottom of the page, for my Full Disclosure!
To get your own policy, go to http://www.disclosurepolicy.org
IMMORTALS – 3D Blu-ray Combo Pack, Blu-ray Triple Play and DVD March 6
Tweet
Pin
Share
Share
Share
0 Shares