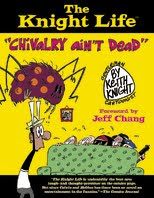 An unabashedly provocative political and social satire, The Knight Life tackles contemporary issues like consumer culture, bacon, the media, race, family and everything else, gently mocking the minutiae of daily life with self-deprecating humor, honesty and goofiness-a combination that’s perfect for the comics. And The Knight Life‘s energetic style reminds readers that comics can look funny as well as read funny. The result is accessible yet edgy, compassionate and political-and never preachy. Cartoonist and comic historian R.C. Harvey said, “The Knight Life is undeniably the best new laugh- and thought-provoker on the comics page. Not since Calvin and Hobbes has there been so novel an entertainment in the funnies.”

Where can I purchase this book?
About the Author:

Keith Knight is best known for his hilarious semi-autobiographical/self-syndicated comic strip The K Chronicles. The comic strip was awarded the 2007 Glyph Award and the 2007 Harvey Award for Best Comic Strip, where it was nominated alongside the best of the mainstream dailies. The Knight Life comic strip, was featured in a number of publications and websites.

My Review:
I don’t know how I managed to miss this cartoon.
Quirky with a capitol Q!
A little irreverent, but clean
(if you know what I mean).
Content about the here and now
of everyday life.
I will have to admit, that once in
a while, I’d really have to put on my
thinking cap…but sooner
or later my light would come on:-)
The critics are right…
If you love Calvin and Hobbs,
chances are very good that,
The Knight Life
will now be one of your favorites!
In accordance with FTC Regulations: I receive books and other products at not cost to me, in exchange for my HONEST review. Please scroll all the way down to the bottom of the page, for my Full Disclosure!
To get your own policy, go to http://www.disclosurepolicy.org
Short Synopsis Sunday:THE KNIGHT LIFE / Review
Tweet
Pin
Share
Share
Share
0 Shares