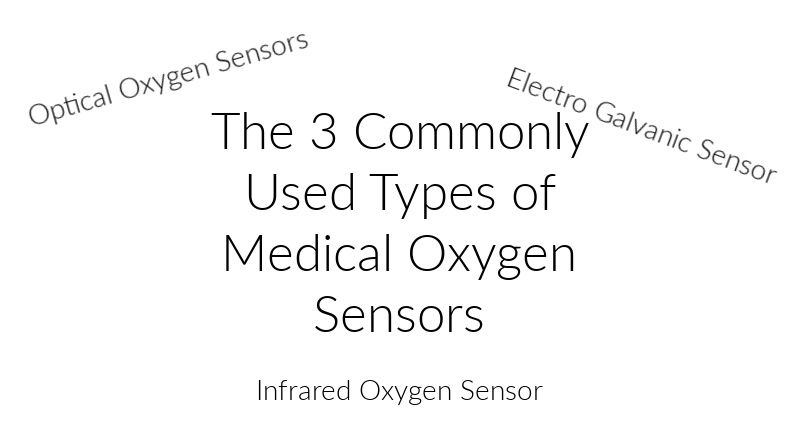 In today’s trying times, amidst a global pandemic that has the potential to lethally target one’s respiratory system, having the right equipment for treating respiratory illnesses is more crucial than ever.

In this article, we’ll discuss the three types of oxygen sensors that are commonly used in the world of medicine, and how they work. Let’s get started!

Classified as ‘optochemical sensors,’ optical oxygen sensors work through the principle of fluorescence quenching by oxygen. Their functioning depends on a light detector, a luminescent light reactive material, and of course, a light source.

An electro galvanic sensor is simply a fuel cell that’s based on lead oxidation, generating an electrical output in proportion to the sensor’s oxygen level. As it gets more and more exposed to oxygen, it continues to consume itself over months—which is a shared quality among electro galvanic and electrochemical sensors.

These sensors are relatively reliable devices, capable of measuring 0 to 100% oxygen levels. As they’re relatively low-cost and highly useful, they’re widely used for medicinal purposes in hospital ventilators. Moreover, they provide reliable readings—accurate to the tenth of an oxygen percent.

One of the downsides of electro galvanic oxygen sensors is their short-lived lifespan—typically only lasting for several months, after which, the accuracy of their readings may start to drop. Luckily, there’s a lot of choice in the world of oxygen sensors; you can find some of the other popular models on this page.

Their most common application is in the world of medicine, used in cheaper earlobe or fingertip devices designed for measuring oxygen saturation in the body.

Red light and infrared are both pulsed through an individual’s skin, and measured by a photodiode. As the two light sources differ in wavelengths, the amount of hemoglobin in a person’s arteries is directly proportional to the ratio of light absorption.

The key advantages of infrared oxygen sensors are that they’re cost-effective, noninvasive, highly portable, and quick to detect blood-oxygen levels. However, some of the low-cost models aren’t approved due to their low accuracy rate.

Have an Old Phone? Here Are Some Smart Ways to Make Use of It

Propel: The Drones You Are Looking For