I’ve begun writing this post numerous times, but I just wasn’t up to following through  until now.  The last couple of months have been really rough.

On March 20th I had surgery.  Pretty minor, all things considered.  It was done at an outpatient surgical center.

I checked in around 6:15 and was on my way back home by 9:00.  I started out with MAC (monitored anesthesia care), but had to be switched to general anesthesia.  I came home in my lovely “boot”, which was to be my companion for the duration. 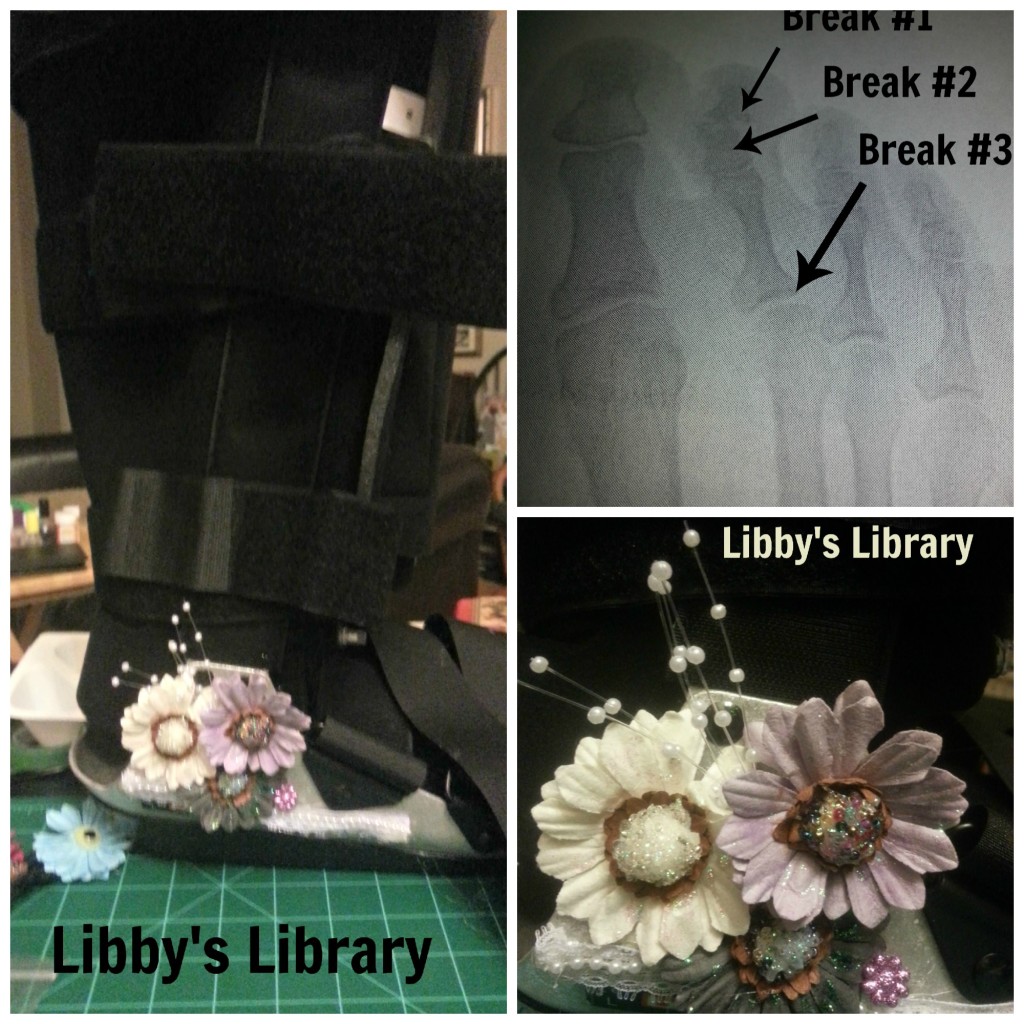 At my 2 week post-op check up, it was quite evident that I had an infection.  My toe was red, hot to the touch, mega swollen, and I was in PAIN.  I was immediately started on a broad spectrum antibiotic. OMGOSH – it made me so sick.  For two stink’n weeks, all I did was sit in the corner of the sofa, sip ginger ale, eat crackers, and (when I could stand it), eat some chicken noodle  Cup A Soup.

Of course – I also developed a secondary infection – caused by the round of antibiotics.   You ladies know what I’m talking about! 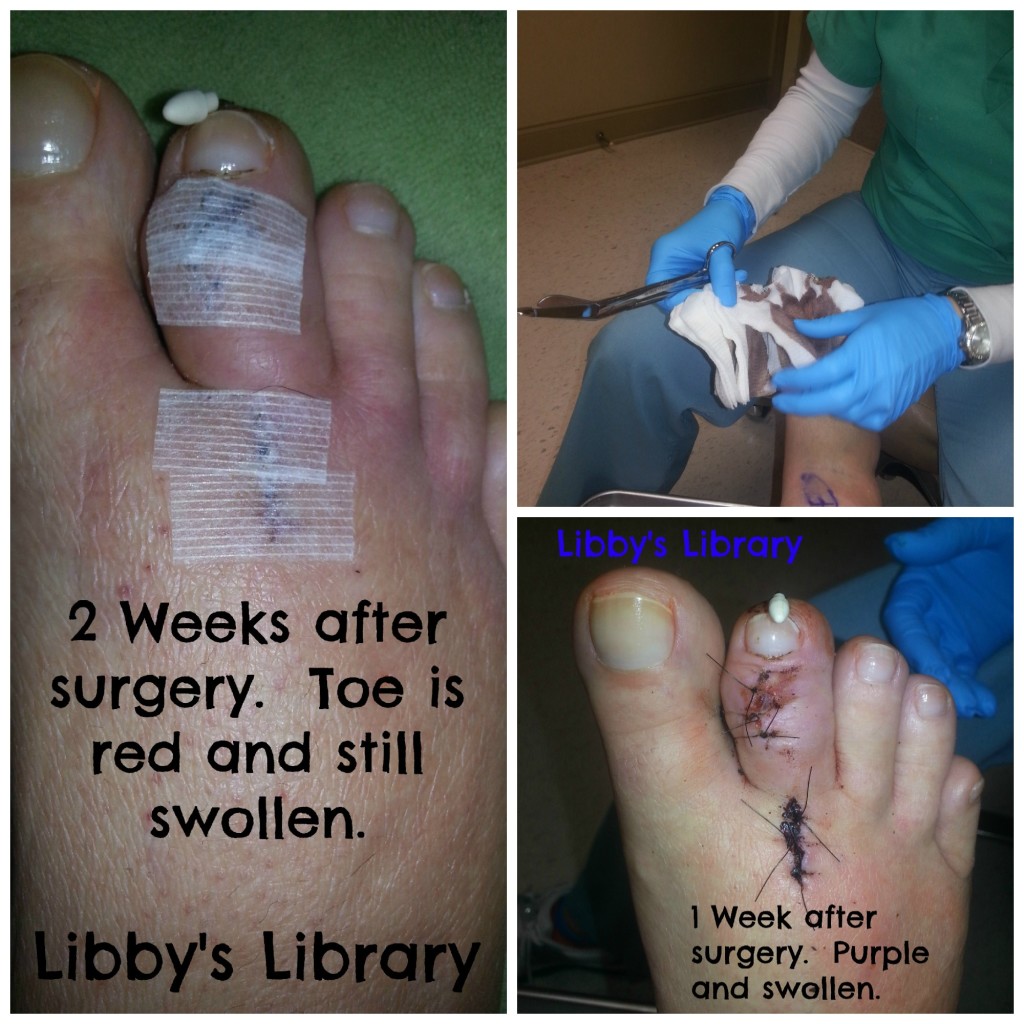 At the 4 week post surgical mark, I thought that I was “out of the woods”, but OH NO.  That would be too easy.

Within a week, my infection was back with a vengeance.  My toe was red, swollen and throbbing.  Red streaks where running up across the top of my foot. I headed back to the doctor for my 6 week post op appointment, and he took x-rays.  Wouldn’t you know it…I had managed to break the K-Wire! 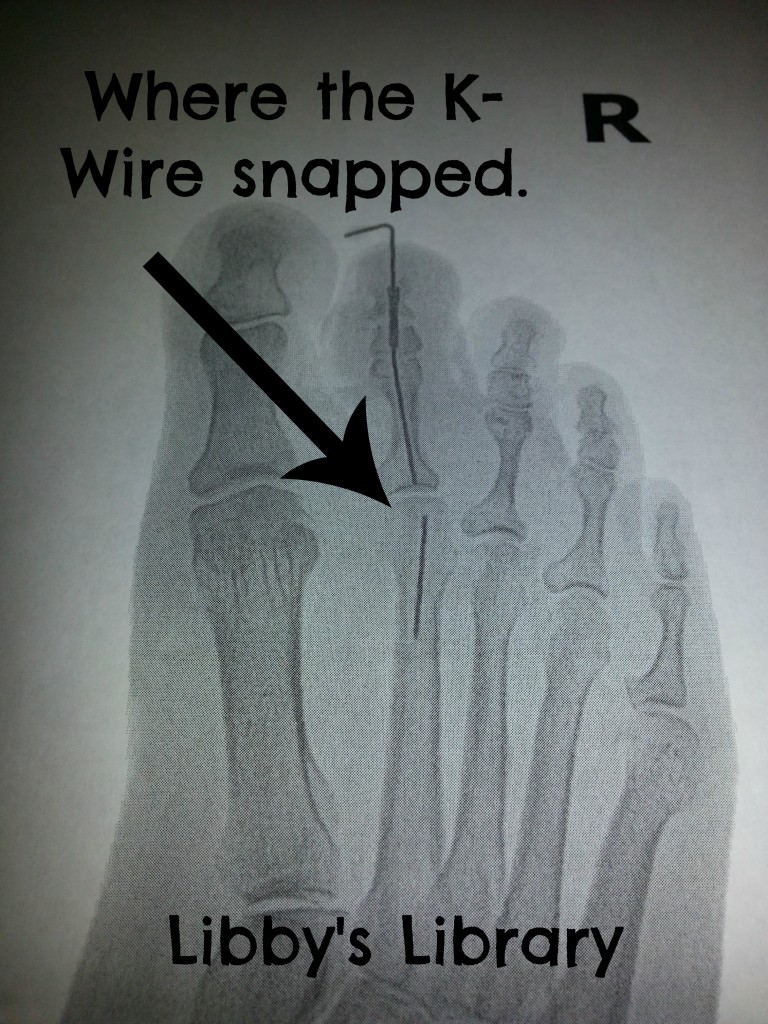 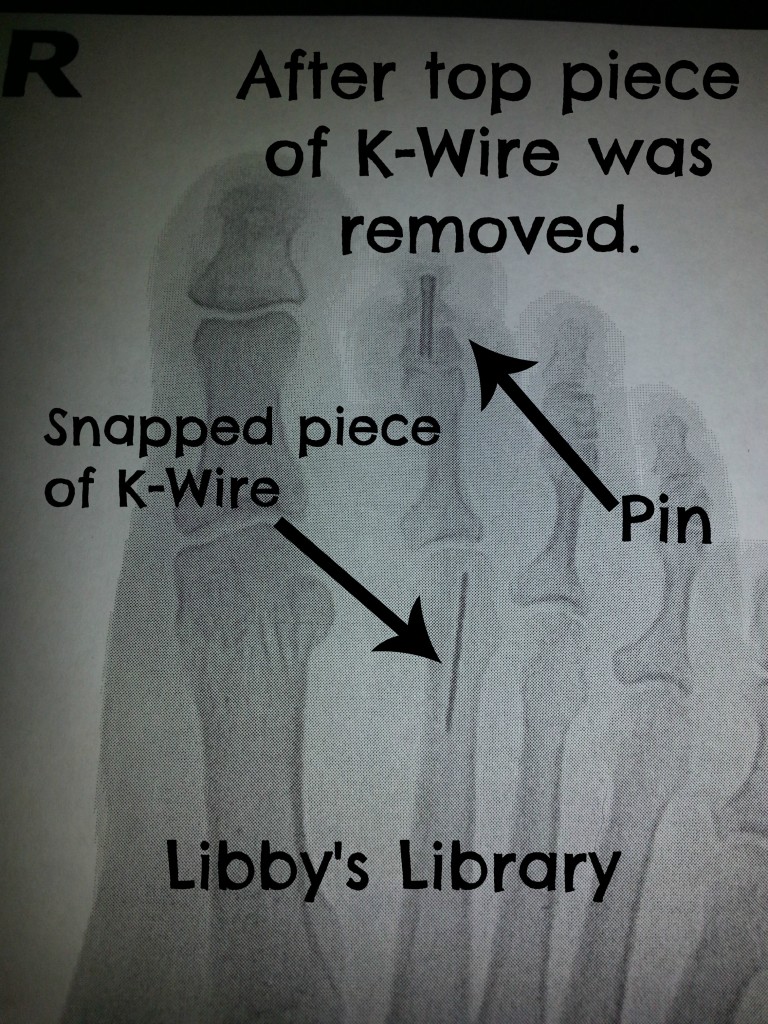 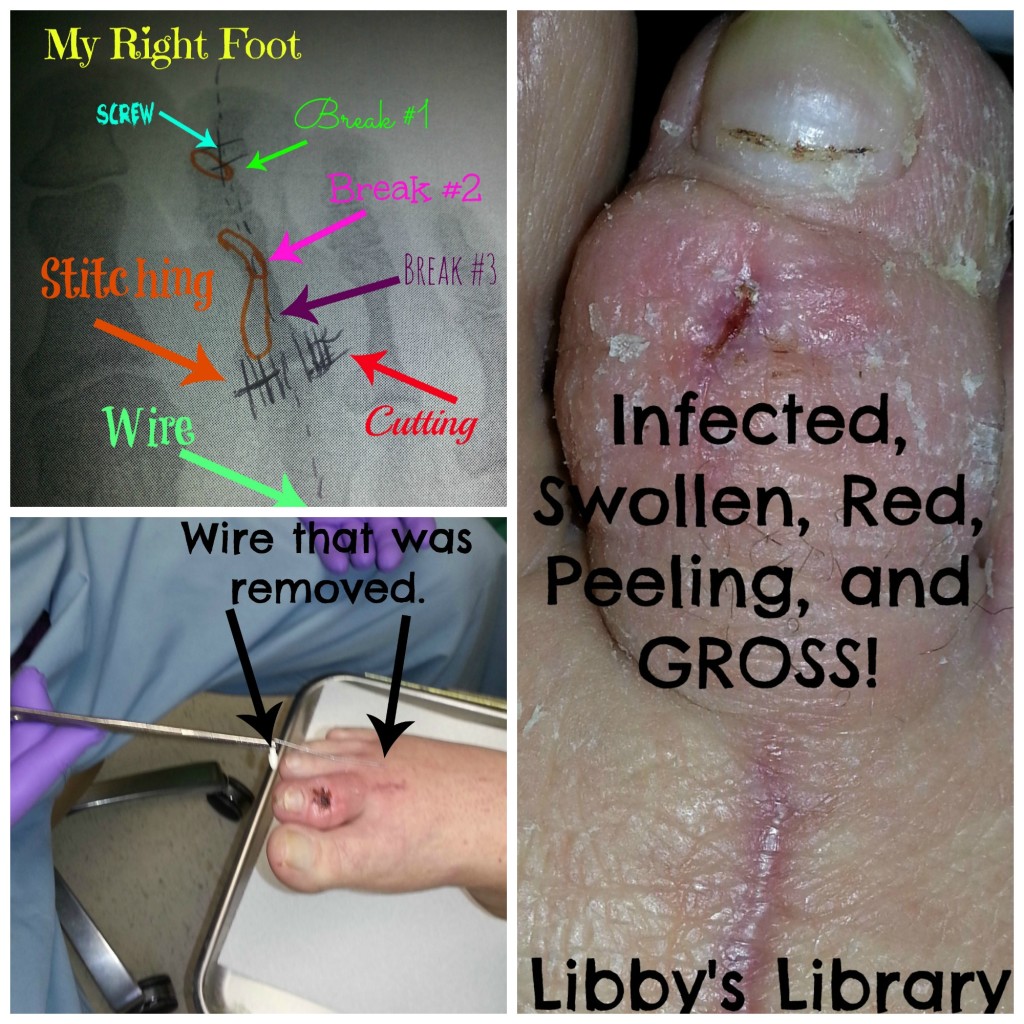 He removed the portion of K-wire that was accessible (yow – did that ever sting for a sec), cleaned the toe, and slathered it with antibiotic ointment.  Since I’m allergic to the adhesive on band-aids, he covered the toe in gauze, then wrapped it in that stretchy tape stuff, that they use after they draw blood. I was then given prescriptions for two new broad spectrum antibiotics (which he said would make the first round seem like child’s play), a prescription for Promethazine (to help with the nausea and vomiting  caused by the antibiotics – I would be using over the counter medication for the problems at the “opposite end”, if you get my drift), along with a script for Fluconazole (for the yeast infection that I would certainly soon have).

OH – if I thought that it was really bad during the first round of antibiotics…I was sorely mistaken.  It was a breeze compared to the second round. I don’t remember ever being so sick.  I literally willed that medication to stay down, because it  was so nasty coming back up.  Unfortunately when I was able to keep the meds down – there were issues on the other end.  Let me tell ya – I had blisters where NO BODY should have blisters. AND, – you guessed it – another whopping yeast infection!

I also developed extremely sore  and stiff joints, which is still affecting me.  Although my foot is much better, moving in general is difficult and painful.  I’m tired most of the time and my stomach still hasn’t totally recovered.

When I went back at 8 weeks I was overjoyed to learn that my doctor was pleased with the healing, and that the pin and lodged K-Wire had stayed in place.

Now it’s a waiting game.  I go back in about 6 weeks, to have a couple more x-ray’s.  Hopefully  the pin and K-Wire will stay put.  As long as they stay where they’re at, I won’t have to have them removed.  If either begins to “travel”, then I’ll have to have them surgically removed:-( If it comes to that, I’ll deal with it.  After all, What Doesn’t Kill Us, Makes Us Stronger.

With all that’s happened, I have to say that I have been truly blessed.  I have fantastic doctors, my daughter (Suzie-Q) and my husband have taken such wonderful care of me, and I no longer have a candy cane toe. The swelling should continue to lessen over the next 3 or 4 months, and with all my stomach problems…I lost about 15lbs.

A big thank you to a number of  sponsors and tour promoters, for being so kind when I’ve missed deadlines, and had to be dropped when I just could not post.

Thanks to you, my readers, for sticking with me.

Here’s a photo of my “new toe” thanks to Dr. Richardson, his staff and Sally Hansen Gem Crush Nail Color…Bling-tastic! 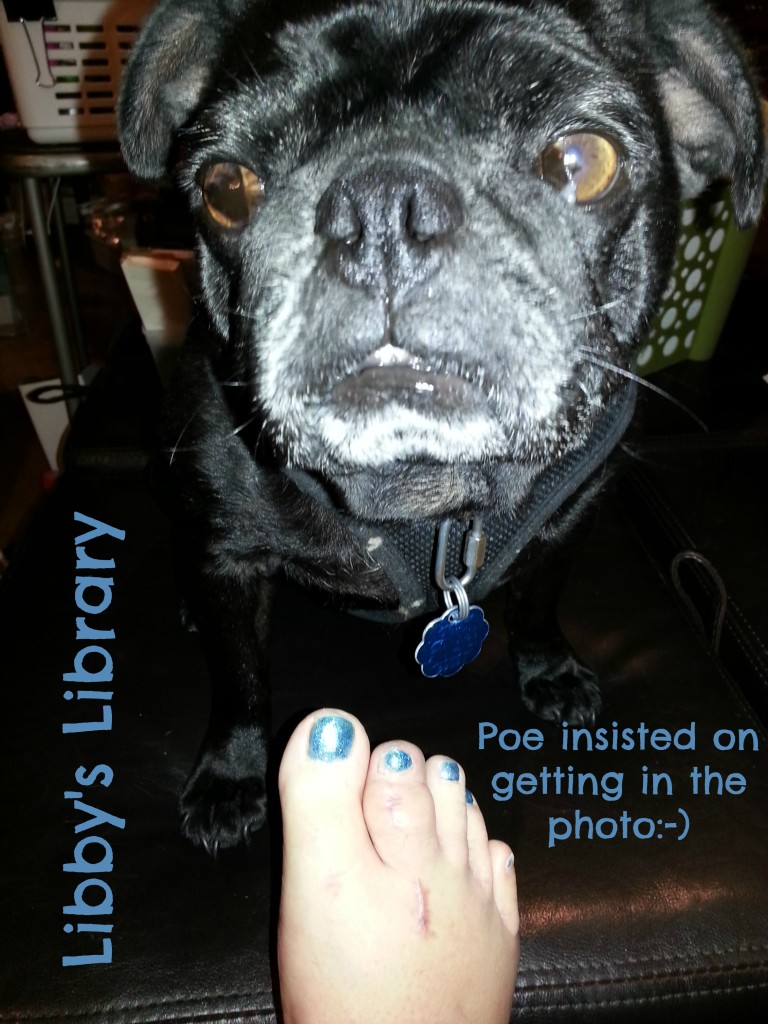 Disclaimer – I was not paid to mention Dr. Richardson or Sally Hansen.  I just <3 them both!