9/11 Film Charlie Sheen Autographed Poster and Gift Pack Giveaway has been provided to me, in exchange for sharing the information about the movie.  No monetary compensaation was received.  All opinions are my own.

Where were you on that fateful day?

As the assistant to the director of a charter school for children with chronic illnesses, one of my jobs was to make sure that our breakfast and lunch programs followed all the state regulations. I was sitting at my desk, filling out copious amount of paperwork, when my boss came flying out of his office.  He shouted at me…  ” The World Trade Center has been hit by a plane.  I’m running over to the doctor’s office to watch the news on their TV!” Within seconds my husband called. “have you heard the news?”. Of course by then, I  had the radio on and was listening to every word.

Our phones began ringing off the hook.  The school board with updates on possible school closings. Parent’s and grandparents who were concerned about the safety of their children.

I had to go break the news to all our teachers, and let them know that many parents would probably want to come and get their kids. We were a small school, so we ushered all the kids into our central meeting area, so they could watch a movie. The staff took turns keeping an eye on them.  Those who weren’t with the children, were in my office, huddled around my desk. As the minutes ticked on, we heard more and more heartbreaking reports.  Our feelings were of total shock and disbelief.

How could this be happening?

In the World Trade Center, a billionaire sits in his attorney’s office awaiting a divorce hearing against his wife. In a west side apartment, a bike messenger kisses his 5-year old daughter and sings her “Happy Birthday” before leaving for work. A maintenance man gets dispatched to help a tenant with his lock. In an upper east side apartment, a young model musters the courage to break up with her sugar daddy. As random as random can be, these individuals step into a crowded World Trade Center elevator.

Wrapped up in their own world, they all ride silently hearing only the sound of the elevator giving notice of each floor. When the elevator stops on the 34th floor, it empties leaving only these five behind. Moments later … their world changes as the collision of a jet into the North Tower incapacitates the elevator.

With no understanding of what has happened and is happening around them, these fives are forced to band together and fight against all odds to escape from the impending horrific collapse. During these critical minutes, a story of courage, faith, and the will to live unfolds.

I had the priveledge of beng able to see a special screening of 9/11.  The acting was stellar.  How they managed keep me hanging on the edge of my seat, with almost the entire movie taking place inside of an elevator… is a testament to their performance skills.   Each role was brilliantly cast. Of coure, I kept hoping that the ending would be different – even though I knew what was coming.

Our readers have the opportunity to learn more about the movie 9/11 and to enter for the chance to win an awsom prize pack. 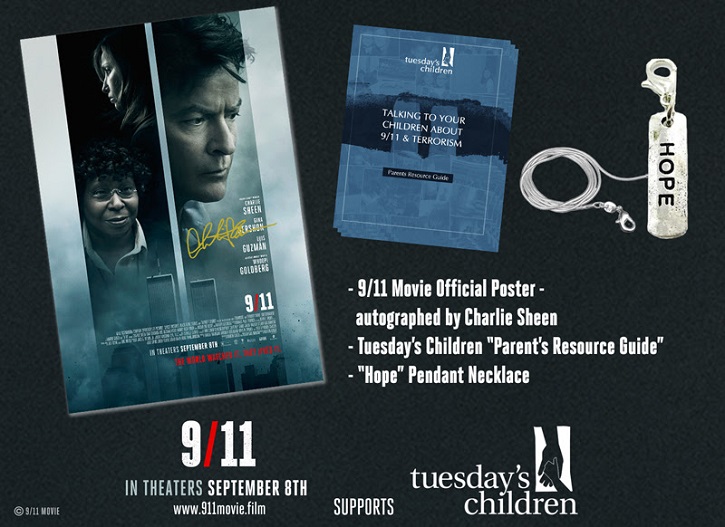 Enter for the chance to win a prize pack for yourself. Just use the Handy Dandy Rafflecopter from, below.

Please be advised that there is only ONE winner per household.  If you enter and win and at more than one site, you will only receiv one prize.