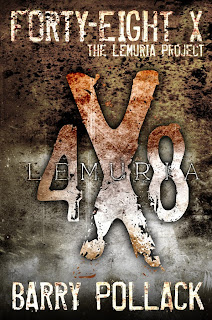 On the tropical island of Diego Garcia in the middle of the Indian Ocean, the United States has gathered together its most talented geneticists to work on the top-secret Lemuria Project. These secret experiments create a revolutionary new warrior so strong and so valiant that the age of casualties of war would become only a sad and distant memory. Haunted by a dark and dangerous past, Colonel Link McGraw is the officer chosen to train these new soldiers. He understands the rules of engagement and agrees to serve his country, reestablish his professional reputation, and secure his freedom in the process. As a trained and commissioned officer in the United States Armed Forces, McGraw knows what constitutes the perfect soldier: following orders without question. When Egyptian beauty Fala al Shodaha and Israeli Joshua Krantz, scientists in their own right, stumble across the top-secret project, they are determined to uncover its true nature and pursue their quest to Diego Garcia. Tensions mount as Krantz and McGraw clash over the project—and vie for the affection of the lovely Fala. When they discover they aren’t the only ones on the island competing for her attention, shocking truths are revealed that beg the question, Is it too late to save themselves—and the entire human race—from almost certain annihilation?

Barry Pollack, who still works in the frontline trenches of medicine as an ER doctor, has a creative life that spans a variety of venues. After a master’s degree in film from Stanford and a fellowship at the American Film Institute, he began as a documentary filmmaker and went on to write and direct two feature films — MGM’s Cool Breeze in 1972 and the Fanfare release This is a Hijack in 1973. In 1980, Pollack graduated from the University of Oklahoma Medical School and began a new career as an emergency physician. However, he never stopped writing. Pollack’s subsequent work includes several prime time television dramas, such as Trapper John, M.D. and Hotel, magazine short stories, several screenplays, and ten years of newspaper columns for the Ventura County STAR in California. Forty-Eight X, his debut novel, was published by Medallion Press in December 2009.
For more information visit www.barrypollack.net

My Review:
Forty-Eight X The Lemuria Project
is scary!
Serious violence.
Explicit sexual content
(which I didn’t think was needed).
Foul language
(which was a little over the top).
But – a first rate story.
Filled with lots of interesting historical information.
Action packed – blood and gore.
This is a real man’s man book.
~~~~~~~~~~~~~~~~~~~~~~~~~~~~~
Stay tuned, because tomorrow
I will have a guest post from
Barry Pollack.
In accordance with FTC Regulations: I receive books and other products at not cost to me, in exchange for my HONEST review. Please scroll all the way down to the bottom of the page, for my Full Disclosure!
To get your own policy, go to http://www.disclosurepolicy.org
FORTY-EIGHT X THE LUMERIA PROJECT / Review
Tweet
Pin
Share
Share
Share
0 Shares