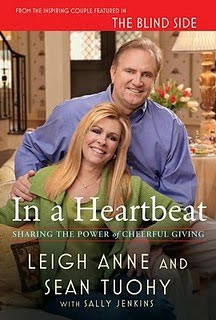 First came the best-selling book, then the Oscar-nominated movie; the story of Michael Oher and the family who adopted him has become one of the most celebrated true stories of our time. The Blind Side—both the New York Times #1 bestseller and the Hollywood blockbuster—introduced the world to Leigh Anne and Sean Tuohy, the Memphis couple who was out for a morning drive when they saw young Michael Oher walking alone along the side of the road. They stopped the car that day, and their lives changed in a heartbeat. That’s the story we all know, but now, for the first time, the remarkable couple depicted in The Blind Side tells their own story, and “The story is greater than we are,” explains Leigh Anne. The Tuohy family story demonstrates that taking a chance on someone is worth the risk.

In a Heartbeat: Sharing the Power of Cheerful Giving by Leigh Anne and Sean Tuohy with Sally Jenkins (Henry Holt, July 13, 2010) takes readers on an extraordinary journey of faith and love and shares unforgettable lessons about the power of giving. The Tuohys’ deeply inspiring memoir offers readers a detailed picture of a family that makes giving a way of life, the huge blessings that decision has brought to them, and the ways we can all make a difference in our own communities.

A Memphis, Tennessee native, Leigh Anne was raised by her devout Christian mother and tough-as-nails U.S. Marshall father, a JFK appointee who served the administration in its efforts to racially integrate schools in the Deep South. She attended Briarcrest Christian School and went on to graduate from the University of Mississippi, “Ole Miss,” with a Bachelor of Science degree in Interior Design. There Leigh Anne met Sean Tuohy, her husband of 27 years. Both were active and ambitious college students. Leigh Anne was a cheerleader, campus favorite, homecoming maid, and active member of her sorority; Sean became a record-breaking SEC basketball champion and still holds several SEC assist records. Drafted by the NBA’s New Jersey Nets in 1982, he opted to continue his career overseas before returning to the U.S. to be with his father in his final days. He became a successful entrepreneur, building a company that now owns and operates 70 fast food restaurants, including Taco Bell and Long John Silver’s franchises. The Tuohys are the proud parents of daughter Collins and sons Michael Oher and Sean Jr.

~~~~~~~~~~~~~~~~~~~~~~~~~~~~~
My Review:
Loved it – and want to be a Tuohy!
Usually I don’t like to read a book, after seeing the movie,
but not is this case.  This family is remarkable.
If all the people in this world possessed even a a fraction of
the warmth and giving as these folks…what a wonderful
wonderful world in would be.

Each chapter begins with a quote from one of the Tuohy’s.
I think my favorite is one of Leigh Anne’s:
“No matter what our origins, backgrounds, faiths, or traditions, we are all the same.”

Oh how true that statement is.
We all want to belong, to be loved, to have a place of safety.
Leigh Anne’s spunk, Sean’s insight, SJ’s pure love of life,
Collins open heart… and Michael – there just aren’t words.

Grab some tissues, snuggle in and let
In A Heartbeat…remind you that
there are really really good people in this world,
and that with just a little thought and caring…
you could be one of them!

*
My thanks to The T B & B Media Group, Inc.
for sending me a copy to review.

d799cd0e-5b37-4111-82ce-866c8e62f72c
1.03.01
In accordance with FTC Regulations: I receive books and other products at not cost to me, in exchange for my HONEST review. Please scroll all the way down to the bottom of the page, for my Full Disclosure!
To get your own policy, go to http://www.disclosurepolicy.org
IN A HEARTBEAT – Review
Tweet
Pin
Share
Share
Share
0 Shares