I’m going to be brave and post a photo of myself….and with no make-up on. I’m doing this as a Public Service Announcement. Luckily for you all, this is not me at the worst point during all of this – that pic would have made you GAG!   The Moral of this story is Don’t Pull Weeds! 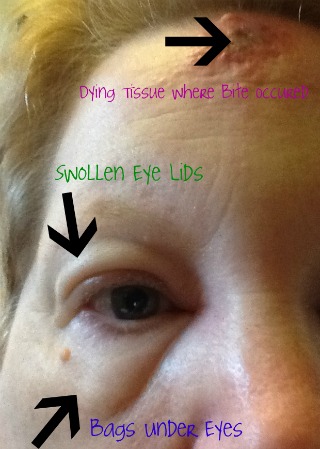 This will also serve as an apology to some “sponsors” who’s posts are late.  I’ve been out of it.  And when I say out of it , I’m not kidding one teeny tiny bit.

I was pulling weeds one night, while I was out in the back yard. (I made myself a rule that every time I took the dogs out to potty, that I would pull weeds, no matter what the time.) I was bending over, yanking out unwanted vegetation, when I felt a strange crawly feeling on my forehead.  There are a lot of bugs out after dark, and I assumed it was just one of those pesky “huge blind mosquitoes”, so I just brushed it away with the back of my hand, and continued on, until the dogs had finished, and were ready to come in for the evening.

As the night wore on, my head was a bit itchy and sore, but I didn’t put much thought into it.

Then next morning I woke up to throbbing hot forehead.  I took a look in the bathroom mirror, and noticed that there were two big read bumps on my head, a lot like nasty pimples.  Hmmmm.  I don’t have a lot of trouble with my skin, other than it being sensitive, and a bit dry.  I promptly tried to pop the little suckers.  Man oh man, did that hurt…and they just bled.

By that evening,  the “pimples” had started tuning purple, a rash was developing around them, and it was hurting more and more.  I’m wondering now, if these pimples might not be pimples, but bites…from bird size mosquitoes.

I wake up the next day, and WHOA – I have an area on my forehead, about the size of a quarter, that has turned BLACK, the rash has spread, and turned really red, any my face seems to be swelling.

Let me back track just a little…

I have a LOT of health issues.  As some of my readers know, I suffered brain damage when my youngest was born. Since that time, I’ve developed some serious medical conditions, and am officially medically disabled.  I’ve had surgeries up the whazoo (well not actually up  my whazoo, or for that matter anywhere close to my whazoo, but you get the point – right?), I’ve got several sleep disorders, Reynauds Disease, and other problems that I won’t bother to go into right now, cause my fingers are tired, and my hair hurts.

YES – your hair can hurt!

Having said all this, I thought that I previously knew what being miserable really felt like. Apparently I was WRONG.

Okay – back to the story.

The day that I finally broke down and went to the doctor, was the worst.  The swelling seen in the picture here, is NOTHING like what it was when my husband dragged me into her office, and the center of my forehead was BLACK . She took one glance, and started writing scripts.

LOL – they are used to getting calls from us first thing in the morning, and they have always been great about working me in right away, but WOW – when Steve called them and said that I  had been complaining about a bad reaction to some mosquito bites, but that to him, it looked more like a spider bite…it was like GET HER IN NOW!

My immune system is non existant…so of course, I picked up an upper respiratory infection, from one of the other patients. So, now my head is peeling, my eyes are still swollen, my vision is blurry, I can’t breath, I’m coughing and wheezing, and hoarse (and praying that this doesn’t turn into pneumonia).  Half the time I puke up the antibiotics, and the stink’n meds make my pee neon orange, and my p…sorry TMI.

I’ve been sleeping – A LOT.  I haven’t been blogging, playing games on Facebook, doing my blog chores (and this has wrecked havoc on my stats to the tune of more than doubling my Alexa rank), and my house could probably qualify as a disaster zone.

MORALE of this story…pay a lawn service.

In the long run, it’s a lot easier, and less expensive,  than pulling weeds yourself.

0 thoughts on “The Morale of this Story – DON'T PULL WEEDS!”